After my long journey across British Columbia, pedalling continued towards the most scenic national parks and towns in Canada. I left the town of Jasper on August 9 before continuing to Banff. I spent two days each in these towns not only to recuperate but also to wander around and get a better sense of the locality, its people, and its on-goings. It turns out, Jasper and Banff do not give you the impression that they belong to Canada’s famous national parks. In fact, both towns exude a very touristy atmosphere. During peak season, they are teeming with many excursionists and have bustling restaurants, lodges, supermarkets, laundry services, etc. Visitors can book helicopter flights or all sorts of other tours ranging from horse riding and rafting to mountain biking and hiking.

Interestingly, the transnational railway passes through both towns and cuts across the national parks as well. The reason for this unusual setup is because the Canadian National Park System, which was inaugurated in 1885 to protect natural heritage, was set up long after the foundation of the towns of Jasper and Banff. The result is a peculiar integration between very commercial towns and nature’s best landscapes.

Jasper National Park is the largest national park in the Canadian Rockies while Banff National Park is regarded as the first national park in the country. The former covers an area of around 10,878 km2 while the latter is about 6,641km2. Located in the province of Alberta, the two bordering parks lie east of the Canadian Rockies, adjacent to the border of British Columbia, and were labeled as UNESCO World Heritage Sites in 1984 for their pristine beauty.

Despite having its own unique charm, truth is, I couldn’t wait to leave Jasper and explore the beautiful wilderness along the Icefields Parkway (the scenic highway which travels through Jasper National Park and Banff National Park), and eventually return to British Columbia passing through Yoho National Park. 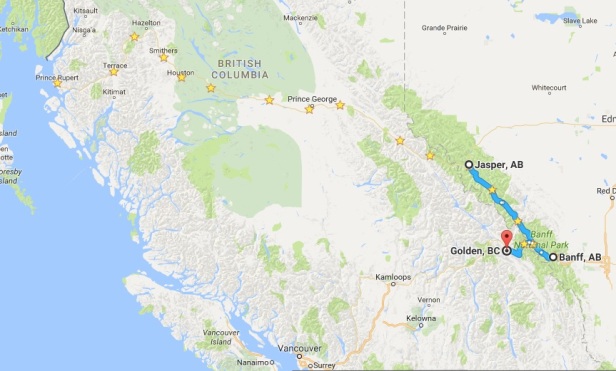 On August 9, I started to head south following one of the most beautiful and most popular roads in North America. Since it was peak season, I wasn’t surprised to share the road with hundreds of motorhomes and campervans. In fact, more than on other roads before, many people honked euphorically when they saw me crawling up the hills. If I am being honest, it felt good to have a bunch of fans cheering you up 🙂

The roads’ shoulders were generously wide enough which allowed me to cruise up and down the hills safely, even while taking pictures on the move. On a fully loaded bike you easily swerve half a meter to the side every time you look back over your shoulder. And that can be very dangerous. For that particular reason, I had bought a proper handle bar mirror in Prince George, which indeed does a great job on a loaded touring bike.

Over the next four days, I passed through some breath-taking scenery which, without a doubt, I would rate as one of the world’s best road trips I have ever done. The Canadian Rockies feature an abundance of glaciers, lakes, waterfalls and alpine mountains of all types you can imagine. Although I could try to describe what I saw, I would not be able to do them justice. I thought it would be best to let the photographs speak by themselves.

In the meantime, I am heading to Vancouver, where I plan to take a one week break from my daily pedalling routine.

Theme of the Week