After having received some recommendations I decided to add a map to each post so you can better visualise the geographic context of my narrative. I want people to feel entertained and max out what they take away from my blog. Too much random information about a region unknown to most can be a bit overwhelming. The map shows stars which indicate towns/places I passed through. The blue route depicts the bike ride covered in this post. From Skagway, I took a ferry to first Juneau and then to Sitka (both starred south of Skagway). 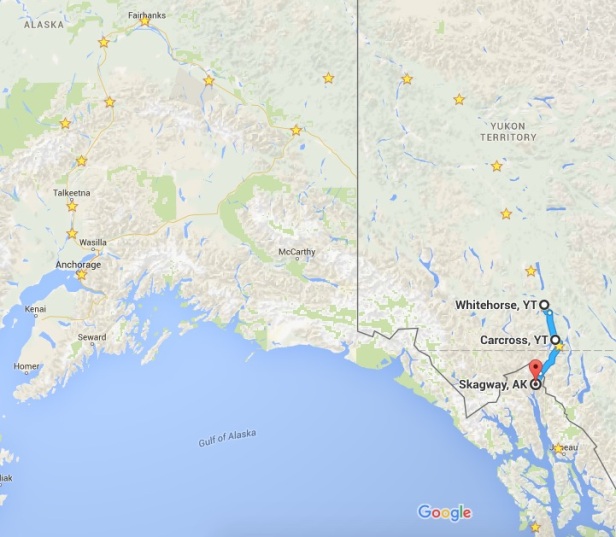 Three and a half days without sitting in the saddle felt extremely good. On July 17, I left Whitehorse. Fully recharged, neither feeling any ache nor soreness. Rik, my cycling buddy with whom I had come from Dawson, had departed on the previous day following his itinerary into British Columbia, whereas I headed towards South-East Alaska. I had always been curious about how that part of Alaska with its deep fjords, enormous glaciers and wild islands compared to the rest of the state. That meant that I had to cross the border from Canada back into the U.S. again.

As mentioned in my previous post the Southern Yukon is rich in glacial lakes which come in all sorts of shades of blue and turquoise. Passing Miles Canyon, a pretty gorge just out of Whitehorse, I enjoyed the mostly levelled ride towards Carcross. Within two hours I ran into several cyclists who were on the way up to Whitehorse: A Korean couple on a tandem who had started in South America, two local girls training for their Trans-America ride and a French couple on another tandem and trailer doing the Pan-Americana as well. All of them radiated happiness which I was more than able to understand on this beautiful day. We chatted for a while and updated each other about the terrain, the next “refuelling” stations (gas stations, restaurants etc.), and continued our rides.

The scenery quickly became very scenic with lots of rugged alpine peaks, most of them still snow-capped. Melting glaciers and snow fields fed numerous streams and glaciers. Right in between lies Carcross (short for Caribou Crossing). I expected it to be just another junction or intersection of 2 regional highways with a plain gas station, but this place exceeded my expectations by far. Carcross was once a popular stopping place for prospectors going to and from the gold fields of Dawson City.

Today, the town hosts a number of art galleries, an old bus converted into a vintage motorcycle museum, the oldest general store still in operation in the Yukon, and a state-of-the-art espresso bar operated by…. you guess…. a bunch of Germans. 🙂 Well, so far, I have no intention to settle in the Yukon, but it cannot be all coincidence. There’s definitely some magic attracting all those fellow countrymen of mine. Carcross is also famous for its superb mountain biking trails which was very visible with about a dozen high-end free-ride bikes parked in front of the cafe.

After a long break in Carcross, it climbed another long hill. My destination was Conrad Campground, which had been set up recently. It’s another one of those Yukon Parks campgrounds with drinking water and outhouses but without shower. I cooked some noodles with spicy vegetables, after I had taken care of my hygiene. Well, it was just a sponge bath but, believe me, with less than a liter of water you can make yourself feel so much better.

On the following morning, I passed through vast area of glacial moraines and shallow lakes, and eventually hit the Canadian/U.S. border. The sunny day made me be in a good mood, and even the U.S. customs officer was by far the friendliest officer I ever encountered at a U.S. borders. A 25 km downhill to Skagway lay ahead of me. It couldn’t have been better. Since this was the steepest road I had been on on this trip I could finally make real use of my brakes. I truly enjoyed the speeds of 50-60 km/h without moving my legs at all.

Skagway was an extreme place in the late 1900s. Apparently, one of the most outlaw towns in North America during the Gold Rush Era. In its peak days, the population swell up to about 30,000, with thousands of optimistic miners passing through and embarking on a rough journey across the famous Chilkoot Pass into the Yukon Territory. Today, Skagway is tiny with less than 2000 residents, but it’s all about tourism with about 900,000 cruise-ship passengers flocking into town over the summer months. From the distance, Skagway still looks charming but when you dig deeper, most of the shops along Main Street, just want the big bucks from the visitors. Between countless souvenir offerings you find shops selling diamonds, fur, Harley-Davidson apparel, and quite a few overpriced restaurants. Nevertheless, I liked my half day stay in town watching the crowds.

At one point, I came across an Indian restaurant which instantly activated a strong craving for a nice portion of Chicken Tikka Masala. I ordered and soon started to eat but all it did was making me tear. Not because of the spiciness but because it was such a lousy meal nobody in South or South-East Asia would ever call Indian food. It was a major disappointment. Sure is that I won’t step into any Indian restaurant until I get to Vancouver. At least I was able to flush down the “bad” taste with a nice fruit smoothie and a dark roast coffee, and all was forgotten.

In the evening, I boarded an overnight ferry of the “Alaska Marine Highway System” to Juneau, which turned out to be a very pleasant experience sitting on the upper deck watching the full moon before passing out in my sleeping bag.

As scheduled the ferry arrived in Juneau at 2:45 am. It was a short night for me but since the weather was still perfect I waited for an hour to have daylight and biked into town. It was a very chilly 22 km ride. I like such first time arrivals to a new place when the entire town is still asleep. At around 5:30 am i watched the first cruise ship docking at the downtown pier before the first coffee shop in town finally opened at six. After three hours of browsing the news, watching people and quite a few breakfast snacks I continued exploring Juneau on my bike mingling with cruise ship tourists.

Juneau is rather unusual among U.S. capitals in that there are no roads connecting the city to the rest of Alaska or to the rest of North America (although the above mentioned ferry service is available for cars). The absence of a road network is due to the extremely rugged terrain surrounding the city. This, in turn, makes Juneau a de-facto island city in terms of transportation, since all goods coming in and out must go by plane or boat, in spite of the city being located on the Alaskan mainland.

Downtown Juneau sits at sea level, below steep mountains about 1,200 m high. Atop these mountains lies the Juneau Icefield, a large ice mass from which about 30 glaciers flow. The Mendenhall Glacier which is one of the two that are visible from the local road system, was on my way to town. For someone like me used to glaciers at high altitudes only, such as in the Alps or the Himalayas, this is quite remarkable as the ice front basically ends just above sea level due to its geographical location so far North.

In Juneau, I stayed with Karla, another host I connected with on the Warmshowers cyclist forum, a lovely and well-travelled Alaskan lady with a great interest and broad experience in environmental and economic affairs. We had long conversations about current issues in Alaska such as exploitation of resources, the state ferry vs the road systems, the impact of tourism etc. We also watched Donald Trump’s speech at the National Republican Convention live on her laptop. In fact, that topic currently brings most progressive Americans close to their boiling point. Let’s hope for the best…

Not just in Juneau but also in all other places I have visited on this journey so far, I have spent a good amount of time with locals rather than just hanging out at tourist attractions. I really don’t want to miss that experience of getting real insights and learning about life at these places, which no guidebook can teach you.

On July 22, I took another ferry to spend a couple of days in Sitka, which was the Russian capital of Alaska before Russia sold Alaska to the U.S. in 1867. Sitka attracts about a quarter million visitors a year, not only for its historical Russian heritage but also because of its beautiful natural setting fronting the Pacific Ocean.

It was pouring when I arrived, and luckily a friend of a Warmshowers host, Julie, was wiling to host me for 2 nights, otherwise I would probably have drowned in my tent. On this trip, I have slept on campgrounds most of the time but at a place like Sitka, you are most grateful for having a roof above your head when you pretty much face an all day drizzle and wind.

Julie, my host, was very accommodating, and showed me some of downtown’s attractions such as the Russian-Orthodox Cathedral, local cafes, and asked me to join friends for dinner. Another great opportunity to meet and talk to locals about life in town, why they moved up here and about what Sitka is like on sunny days. 🙂

Since the sky didn’t clear I didn’t get to enjoy the fantastic views of the mountains and the distant volcano. Nevertheless, it was a lot of fun walking around town checking out shops, the yacht harbour and the Sitka National Historical Park which is filled with totems and Russian artefacts scattered over a great boreal rainforest.

My journey continues with a long ferry ride to Prince Rupert, where I will resume riding my bike through British Columbia on July 26.

4 thoughts on “Into South-East Alaska”

Theme of the Week